Paris is known more for its landmarks, art, cuisine and relaxed atmosphere than for chaos and bombings. With the exception of World War II and Nazi occupation, Paris, the capital of France has been relatively safe and welcoming to millions of people from around the world. It is fawned over as the unofficial capital of the cultural connoisseur world. Once again, the world's eyes are on Paris but for the wrong reasons.


Just 10 months after the January attacks on Charlie Hebdo, Parisians are again in shock at Friday's suicide bombings, shootings, hostage situations and explosions across the city. Some 120+ people have been declared killed in the terror attacks while another 200 are injured. The Bataclan Theatre, Le Cambodge Restaurant, a bar and the Stade de France the national stadium were targeted shamefully. All four places and the Gare du Nord were filled with people out on a normal Friday night either going to concerts, at the restaurant, chilling or minding their own business. The explosions were meant to maim and terrify ordinary French people more than the politicians. The Bataclan Theatre has been the focus of the events as over 80+ innocent people were killed after a hostage crisis reminiscence of the 2002 Moscow Theatre siege by Chechen terrorists. No one at the Bataclan wouldve foreseen the violence that unfolded while attending the Eagles of Death Metal band show. The Eagles of Death Metal (premonition if you will) are from the United States and were planning to enjoy their own peaceful world tour. The hundreds of fans were anxious to see the performance.


At the Stade de France, the 80,000 football fans paid no heed to the first explosion that went off during a friendly match between France and Germany. Football matches are known for having diehard fans and fanatics who shoot flares, fire off fireworks and noisemakers among other things at friendly matches and not to mention local club derbies. The fans were overly excited to see their country play. It wasn't until after the match and the second to third explosion that the football fans realized something was utterly wrong, rushed out of the stadium and ran towards the exit. They originally remained inside the stadium for safety. French football star Lassana Diarra lost his beloved cousin Asta Diakite in Paris attacks. She is one of many victims.

On the streets of Paris in the different arrondissments in the 10th and 11th, Parisians and tourists ducked for safety leaping over the Bataclans' windows or staying in doors under orders of Paris mayor and city council. Charles De Gualle airport was shuttered and the French borders were sealed briefly. Belgium out of justified panic reinstated border checks.

In Buddhist and Hindu teachings, Samsara translates into continuous movement. Samsara is the cycle of constant rebirth and death. The Paris attacks and national security state that France has become is giving birth to the Samsara Police State. Since last Friday's Paris attacks, French President Francois Hollande has declared a 3 month long state of emergency for the first time in over 50 years. The French police already militarized since the September 11th attacks in the U.S. has been given a carte blanche to arrest, racially profile and treat ordinary Parisians and by extension tourists both local and outside as suspects and potential enemies within unless proven otherwise. French police have been using brutal tactics toward French citizens of African descendant going back decades. The heavy handed tactics are nothing new. Especially against French protesters, suspected criminals and French people falsely accused of violent crimes and terrorism. The French police's excessive use of force also extends to migrants in Calais and the San papiers or sin papeles migrants transiting through France towards the UK. There is ongoing police raids in Saint Denis a suburb of Paris home to the Stade de France and a large number of French citizens of African descendant. The French government and Hollande see no double standards in using police force against its own citizens or regarding the State's security as top priority while preaching democracy and freedom to the rest of the world. The State of Emergency is based on France's old colonial state of emergency law that was used during the Algerian Revolution and War of Independence from 1954-1962. Algeria became an independent country in July 1962. Keeping the recent attacks in mind, remember that in 1961 the Paris police committed a massacre of 100+ Algerians living in Paris protesting against the French use of terror and force at the time during the climax of the Algerian independence of war. The Algerian men, women and children were thrown into the Seine River after the massacre. The wider Western media had been mute and kept its silence about the massacre until recently. Even now the mainstream media in France hasn't said much about the 1961 massacre. The protest that proceeded the police massacre was condemned as illegal just how France became one of the first countries in the world to ban Pro-Palestine protests. France's response has been to bomb ISIS off the face of the Earth while destroying Syria further physically and socially. The samaraesque war is creating more Syrian refugees and migrants many of who have little refuges in other parts of the world. The French government justifies the NATO styled bombings of Raqqa and other Syrian towns as revenge (without mentioning it in name) for the Paris' dead and destruction. . George Orwell is rolling in his grave. 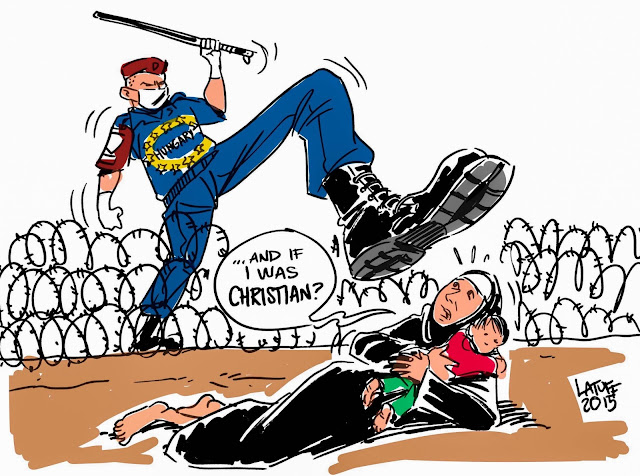 Over 31 state governors across the U.S. are panicking over the possibility of having to resettle thousands of Syrian refugees following the events in Paris. Without making distinctions, the governors and state governments have condemned Syrian refugees for the Paris attacks and used guilt by association to vilify groups of people based on religions and nationalities. The U.S. Congress has recently made it difficult for Syrian refugees to seek refuge in the U.S. Hundreds of thousands of Syrian refugees by extensions Eritreans, Afghan, Iraqis and Palestinians are waiting in refugees camps in Lesbos, Calais and other towns across Europe to save their lives and families from the continuous wars in their homelands. Many people if in the same situation would do the same. The right wing parties and local community organizations across Europe ie Front National, PEGIDA, English Defense League, have all feared that the hundreds of thousands refugees and migrants coming into Europe might be used as a Trojan horse by ISIS to sneak takfiri terrorists into Europe to cause untold harm and destruction to Europeans at the expense of innocent people from migrant families and new arrivals. The migrant camp "the jungle" in Calais was set on fire by unknown attackers in response to the Paris attacks. Muslims and their Abrahamic brothers around the world have joined with other peoples and religious leaders to condemned the attacks and oppose terrorism in its multiple forms.

Inspite of the fears by the right wing parties and governments, the Paris attacks which the Iraqi government warned would occur, was not even carried out by migrants or anyone from Syria. A Syrian passport was stolen by a terrorist. However, the French and other Western governments can't point a finger at Assad as the culprit. All the terrorist involved of Paris attacks were French and Belgian citizens. All of them were born in Paris and Brussels. One of the still missing terrorist Salah Abdelsalaam was born and grew up in Molenbeek, Belgium. His own family disowned him and have condemned the attacks. Molenbeek has lit candles in memory of the Paris attacks and expressed their outrage. The residents wants the world to know that their neighborhood is neither dangerous or related to terrorism at all. It is now known that Belgian and French intelligence knew of the terrorists' backgrounds. 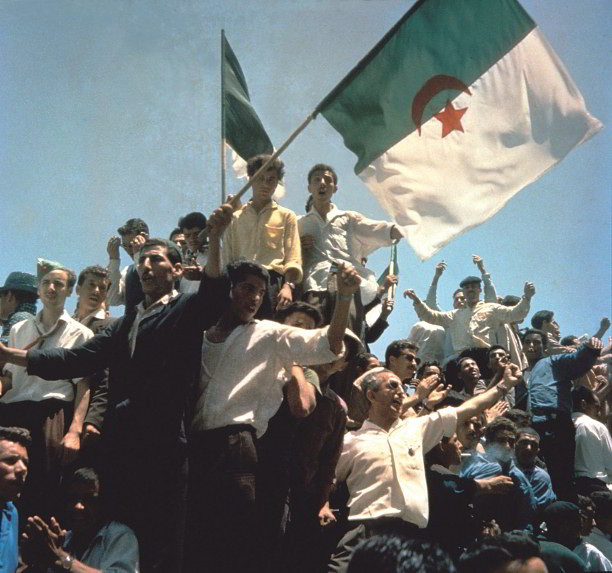 France has never forgiven Algeria's FLN for seeking independence through a combination of nationalism, anti colonial and pro Non alignment resistance and armed struggle. Until 1962, Algeria was controlled by France as a department of the mainland instead of just a colony like Morocco or Mali. France would be damned if the anti colonial and pro independence via armed resistance gained Algeria its independence. To this day, talking about the Algerian war of independence where the French used torture and sanctioned state terrorism to break the independence movement, is considered taboo and controversial. Nevertheless, it is a lesson in how not to create more enemies or destroy the world further. 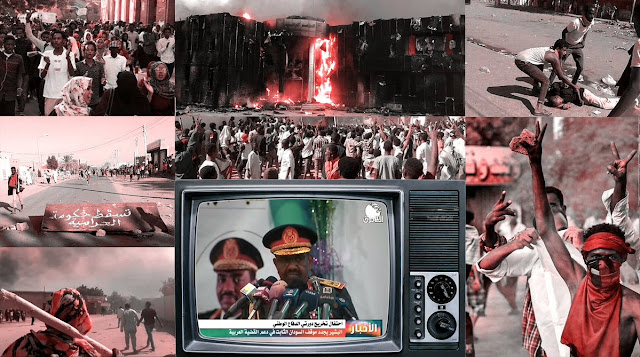 For nearly two weeks, the Sudanese people have been out in the streets in mass across Sudan protesting against the rickety, paranoid and brutal dictatorial government of the now President for Life Omar al Bashir. The protesters chanted, "bread, freedom and peace." Others shouted "down with the dictatorship." The ruling party NCP's headquarters were burned down in Atbara. But these protests are not a late Arab spring. It is worth remembering that the current protests that began in the marginalized cities of Atbara north of the Sudanese capital Khartoum and El Gadarif in Southeast Sudan near the border with Eritrea, are not new protests. As been said before, the Sudanese have been protesting against the government for the past thirty years sometimes in silent and without fear. The largest, continuous protests were the 2013 named the Sudanese Intifada. It began as an anti austerity turned anti government protests that lasted several weeks but was quenched by the … 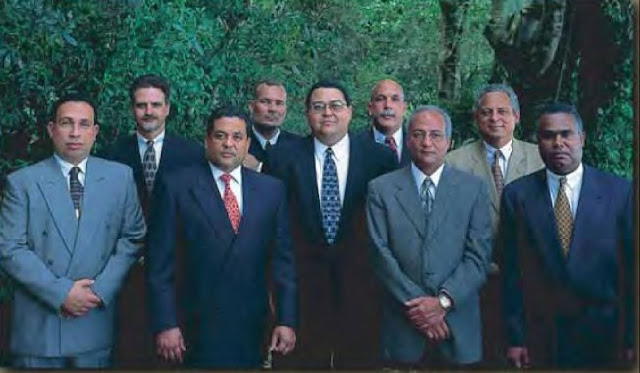 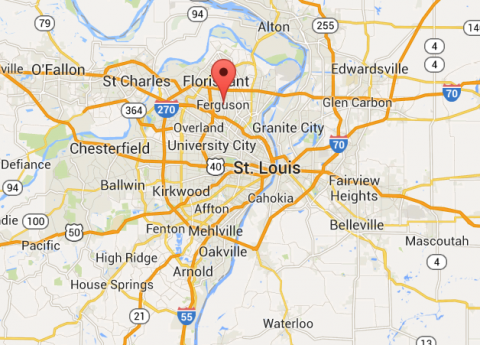 Ferguson rising and on fire

Ferguson teens use drums to protest The decision is in...And it comes as no surprise to anyone that Officer Darren Wilson will not be indicted. It does not mean that he won't be tried again or karmic justice won't find him. The jury deliberated for weeks now to deliver their decision anticipating the reaction from the people of Ferguson. Men, women and children in Ferguson have been peaceful and going about their lives even during the preceedings. Peaceful protesters and community activists have been holding candle light vigils and pleading with other less peaceful residents and outside instigators from near and  neighboring cities or states not to cause chaos. Michael Brown's parents have asked and called for calm protests and expressing anger without the police using military style force or Missouri governor Jay Nixon relying on the national guard. For weeks, the peaceful spoke, demanded and plead for calm, …